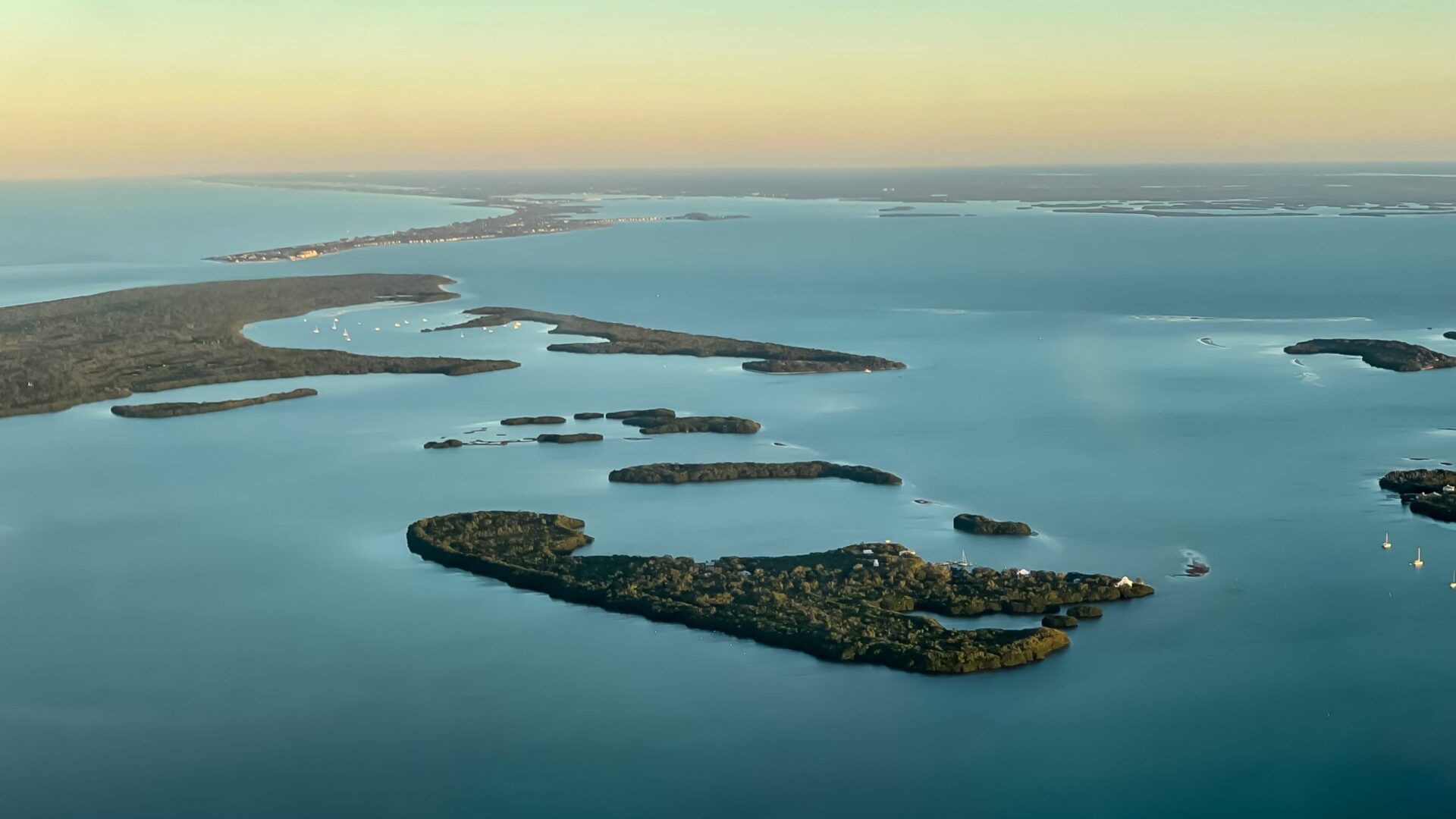 We awoke early in the morning, our bodies teeming with energy and excitement. Our bags lay across our beds preemptively packed for the grand adventure. When we arrived at Continuum we couldn’t hold our composure. Chatter of today’s journey infected the classroom and before long the building roared with excitement. Our good friend Daniel picked us up and drove to the Orlando Executive Airport where a Piper Archer plane awaited us. Daniel educated us on the engineering of the plane and the importance of pre-flight checks. As we climbed aboard the plane, our bodies shook with exhilaration and anticipation. Our hearts elevated with Daniel yelling “Clear!”, the start up of the engine, and the rumbling of the plane. Skittish giggles echoed around us as the propeller spun faster than we could blink. Daniel flipped some switches and the plane shook harder and pulled forward. After some communication with the tower and taxiing, we raced down the runway until the plane lifted us high into the sky. The view was intoxicating   — we saw the city from the clouds and it was mesmerizing. Cars dotted the roads like ants; skyscrapers fell flaccid as the city shrunk behind us.

We continued on our trajectory south-west, our heads pressed against the windows of the plane, trying to swallow as much of the view as we could. The flight lasted about three hours. As we approached the Naples airport airspace, we began our descent to the designated runway. The plane dove downwards and softly skidded across the pavement. A sign caught my attention first… “Welcome To Naples Florida!” We exited the plane hoping to feel the fresh air of the south… but we were promptly met with the ground as our legs refused to work. We scrambled up onto our ankles and preserved on our quest to breathe Naples’s air. It tasted like jet fuel.

Ms.Y met us at the airport where we drove to her brother-in-law’s house. The Fischer home welcomed us with two dogs blitzing at our ankles. Spanky and Soxy were their names and they were the friendliest dogs ever! They froliced around us as we gave them the occasional head rub and belly pats. When Mr. Fischer arrived from his work as a boat captain, he invited us to use his kayaks and paddleboards out in the canal. We jumped into our swimwear and lugged the kayaks and paddleboards down to the cut of land. We arrived on the water’s edge at the peak of sunset. The view was resplendent — to this day the way the light fragmented off the water’s crest befuddles me. It was as if Naples had saved its most beautiful sunset just for us.

We returned “home” and munched on star fruit from the backyard trees. We showered, refashioned, and went to the kitchen. I cracked my fingers and got to work. Chopping vegetables, grinding spices, and scoring the chicken. The sweet aroma of tuscan pasta filled the house as the occupants drooled at the sight of it. Daniel prepared a beautiful charcuterie board (That didn’t take me 20 minutes to spell.), and we enjoyed it along with the main course and side dishes.

The next morning, dawn seeped in from the windowsills and we went out to fish with Captain Fischer. The sun peeked over the horizon, its iridescent light pouring over the sides. We sped along the water, the boat rocking up and down ferociously as we cut through the bay. We eventually let up on the gas and halted in calmer waters. The sun was now at its climax, its blazing heat crisped our hair. Captain Fischer began to teach us about the commercial aspects of fish. The Florida Fish and Wildlife Conservation Commission has requirements for each species of fish dictating in part size requirements to be met; if not met, the fish must be a “catch and release.” This is to protect the ecosystem from overfishing. All the laws and regulations spun around our heads.

Our feet tapped anxiously awaiting the rods. Captain Fischer walked over to a large cooler onboard the boat and lifted the lid revealing hundreds of squirming shrimp. He plucked one out, snapped it in half, hooked it onto a rod, and cast it out. Not 20 seconds went by when the rod began to bow sharply forward. Captain Fischer snapped it back and reeled in the first catch of the day — a Lane Snapper. He pressed it up against a measuring tape strapped to the boat and confirmed its 8″ of length; he tossed it in the cooler. He gave us each a rod and we spent the whole day fishing. Waves of excitement drew over us and we caught fish after fish – more snapper, mackerel, sea trout, and grouper.

Eventually, the sun’s blazing heat became too much and we headed toward Cabbage Key, an island of about 100 acres accessible only by boat with very few residences and no cars.  We sped through the waters, cutting through islands and precipices jutting from the water. Along the way, we were joined by a playful pod of dolphins. We arrived at a docking bay, tied off the boat, and took our first steps onto land after 6 hours of boating. We entered the “Open Air” restaurant, heavily smelling of live cuban laurels ripping with moss. Covering the walls and ceiling was an abundance of dollar bills, each dollar with its own story to tell. Some had phone numbers, others drawings, quotes, or messages.

We scarfed down on our food and ordered a hefty dessert. But the fishing day was not yet over. Returning to the boat, we began the trip back stopping by some mangroves to take in the glorious red light of the sunset spilling into the water below. Hoping to pick up some redfish or snook, Cameron and I prepared our rods with the others choosing instead to relax. Cameron’s reel began to throttle and spin — Captain Zack looked up and realized Cameron had hooked a shark. A plethora of screams hailed from the boat, whoops and cheers spilled over the sides until a deafening silence. Cameron focus . . . ;  an experienced fisherman, he gave the shark some slack and let it tire itself out, then reeling it in, bit by bit the shark came ever closer. We were replete with excitement — when all of a sudden a loud SNAP deafened our ears as the shark broke the line and sped away . . . . And before we could register this event, my reel, which we had ignored, began to scream; smoke erupted from the rod as another great beast took my bait. It began to cut through the water, its fins acting like blades. I was instructed by Captain Zach to hold the rod tight and close by my waist. We were determined to rescue this shark by reeling it in, attending to the hook it had taken, and letting it go.

With detailed instructions and guidance, I let the shark tire itself out so I could reel it in. It was like playing a game of chess — the back and forthing of moves. My hands burned with every pump and reel. Inch by inch, I brought it closer. I could feel my heart beating out of my chest; it was one of the most ferocious creatures I had ever seen live and in its natural habitat. Screams and cheers erupted from the boat. It was less than a yard away from our grasp. With one final pump and reel, I pulled it in. Captain Fischer grabbed the line and hoisted the shark up. Realizing the depth of the hook, Captain Fischer was left with no choice but to cut the line in full from the hook. Thankfully, the hook was one made with a natural material that is coated with a dissolvable layer thereby allowing fish to continue feeding and protecting against infections.

It was a fantastic day. As we sped away from the mangroves, I looked back. The shark’s eyes gleamed back at me like black gemstones in the night. As we cut through the night water, sprinkled with the reflections of the stars above, a glooming cast of shiny droplets peered over the sky. The world fell into a darkness I had never seen. Shadows crept in on the edges of the boat as we went hell for leather through the eerie waters. It was different at night, the salt spray didn’t warm your face; your hands felt numb; your teeth began to quiver. Cruel and cold, the sea was merciless that night. We all sat up in the bow of the boat together, feeling the hard slap of the wind across our faces. It howled like a thousand storms screaming at us. We imagined from over our shoulder, an eerie melody was being sung.

“Is this real life, is this just fantasy? Caught in a landslide, no escape from reality . . . .”

The voices grew louder until the boat erupted in a cacophony of singing voices. They drowned out the wind as the voices continued to sing Queen.

The words divulged over the bow of the ship, the music was vehement — its tone low but sung with passion. The skies flashed white as the singing grew. My voice went hoarse as the song sucked the moisture from my throat. Together, we sang, attempting to overpower the wind with our euphonious voices. Eventually we reached the shoreline and the singing died down.

Captain Fischer took out a blade and began to filet the fish we had caught. Quick, clean strokes along the flesh, he cut across the fish at an angle, below the gill flap and fin to the bell; then he brought his knife from behind the head along the top of the dorsal fin to the tail, skimming the knife over the bones to free the top filet. We watched in awe as he fileted a fish in less than 10 seconds, scraping the remains and tossing the beautiful cuts of fish into a pile.

We drove “home,” smelling of abhorrent fish. We showered and dressed for the night’s dinner. We decided to celebrate at a cozy restaurant which agreed to cook up the fish we had caught. The piquant fish melted in our mouths as we took it piece after piece; a whole stack reduced to the crumbs in which some of it had been breaded.

We awoke in the morning, our bags packed and ready to go. Ms.Y took us to the Naples Private Airport where we boarded once again onto the Piper Archer. Daniel flipped his knobs and switches. As the plane began to roar, we felt our hearts elevating just like they did the first time. Taxiing down the runway, we took off and flew into the clouds with the same sense of excitement we had experienced the first day. We aviated through the clouds and skies until we finally reached the Orlando area. We began to dip down, and we felt our stomachs drop as we glided onto the runway. We stepped out of the plane, stretched out our arms and legs, and rode back to Continuum. We were greeted by our friends with cheers and whoops and hugs. As they gathered around, we shared our adventures. Their eyes widened as I told the story of the sharks, my hands still burned just talking about it. 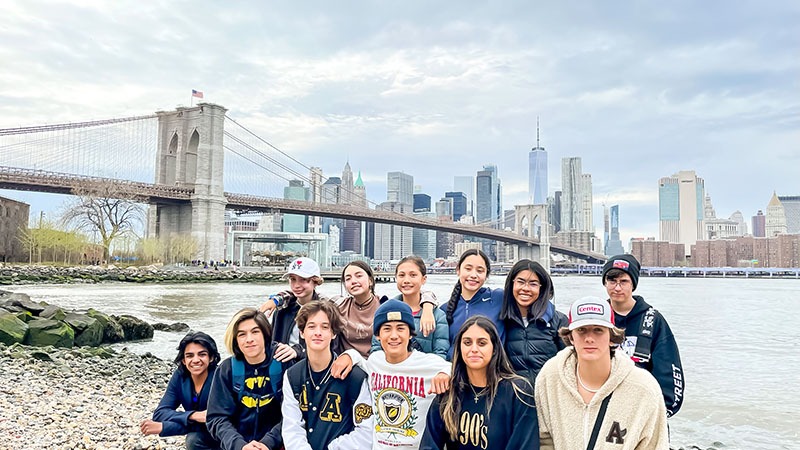